Pablo MacDonough gave La Dolfina the early lead on a goal from the field in the first chukker.  Gonzalito Pieres scored to tie it up at 1-1.  Three minutes later, Nico Pieres put Ellerstina ahead, 2-1, to end the first chukker.

Facundo Pieres scored the first goal of the second chukker, giving Ellerstina a 3-1 advantage, but La Dolfina stormed back.  Ellerstina fouls allowed Adolfo Cambiaso to convert a pair of 30 yard penalty shots to tie it up at 3-3.  Gonzalito Pieres’s second goal of the game had Ellerstina back on top, 4-3.  A foul in the Ellerstina goal mouth gave Cambiaso a short penalty shot for a goal and the chukker ended in a 4-4 deadlock.

Goals are hard to come by in the third. Adolfo Cambiaso put La Dolfina up 5-4 on a 40-yard penalty conversion. Facundo Pieres followed up Nico Pieres and tied it up on a goal from the field. At the end of three periods of play it is all even at 5-5.

La Dolfina picked up a pair of goals from Cambiaso in the fourth (one by penalty one from the field) to lead, 7-5. Nearly six minutes into the chukker, Ellerstina's Facundo Pieres scored on a neck shot through a crowd. La Dolfina led at the end of the first half, but Facundo’s goal cut the lead to a single goal, 7-6. 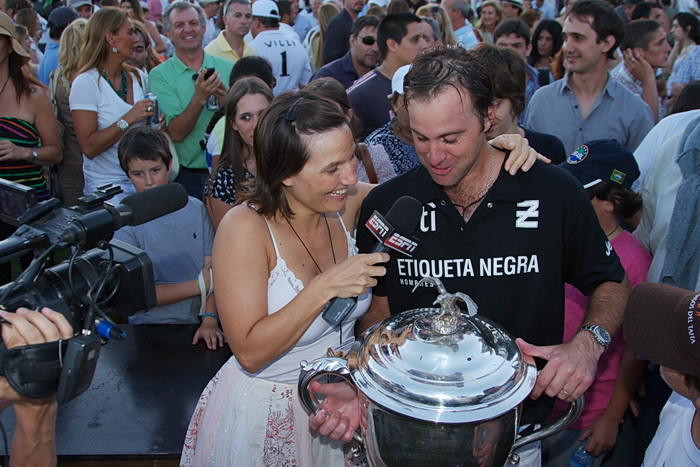 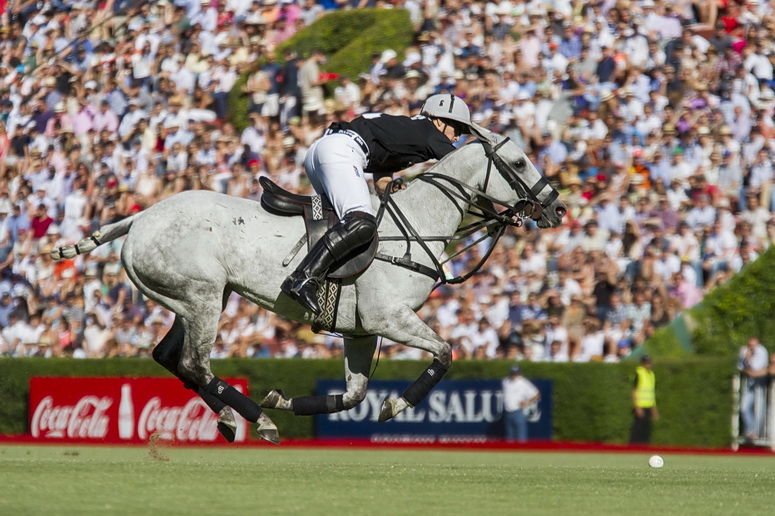 Mariano Aguerre scored his first goal of the game in the opening minute of the second half to knot it up at 7-7.  Facundo Pieres gave Ellerstina the lead on a 60 yard penalty conversion just two minutes later and Ellerstina was leading, 8-7.  Facundo Pieres scored on a 60-yard penalty shot and the defending championship La Dolfina team found themselves trailing by two goals, 9-7 as the chukker ended.

Gonzalito Pieres scored from the field less than two minutes into the sixth, carrying the ball over two-hundred and fifty-yards down the field.  Facundo Pieres converted a 30-yard penalty shot and Ellerstina was up, 11-7. Cambiaso cut the lead back to three goals but missed a 30 yard penalty shot to end the chukker trailing Ellerstina by three goals, 11-8.

Facundo Pieres put Ellerstina up by four goals again, 12-8, on a beautifully executed neck shot just a minute-and-a-half into the seventh chukker. Juan Martin Nero responded for La Dolfina with a goal from the field at 2:44, for a 12-9 score.  Cambiaso cut the Ellerstina lead to a pair of goals on a short penalty shot and the chukker ended with Ellerstina defending a 12-10, two goal lead.

In the opening 30 seconds of play, Gonzalito Pieres fouled Pelon Stirling, but Cambiaso had the 60-yard penalty shot blocked.  La Dolfina continued to press the attack with no results.  An Ellerstina foul put Cambiaso at the penalty line once again, but the 10-goaler proved he was human, missing his second 30-yard penalty shot of the game.  Moments later Cambiaso got another opportunity on a 60-yard shot, but once again it was blocked and cleared by Ellerstina.  A defensive backhander by Mariano Aguerre last in the chukker reversed the field on La Dolfina and despite a final charge at the Ellerstina goal by La Dolfina, the shot by Nero went wide (6:27), and Ellerstina looked to have the game won.  Ellerstina controlled the ball in the final seconds of regulation time, as neither team got on the scoreboard in the eighty.  Time expired and Ellerstina celebrated the 12-10 win.